Why do you think that Arn is able to get away with some of the rule breaking things he does at camp?

·         He gets away with the things he does bad at camp because all of the guards there know that he is the star band player. He is the khim player and he is the one that keeps the whole band together when they have to play their music to mask the sounds of the Khmer Rouge killings the people in the camp. When Arn is caught out of bed and stealing rice, the guards just let it go and tell him to go back to bed or not say anything at all. He thinks that since he is the star of the show, he can challenge the Khmer Rouge and he can.

Why were the Khmer Rouge Soldiers so cruel to the prisoners in the work camp?

How did the Khmer Rouge mask the sounds of the killings that were going on and why did they want to?

·         The Khmer Rouge had a select group of camp prisoners in a band that played songs very loudly to mask the sounds of the screams and killings that went on at the camp. They had to mask these sounds because they didn’t want anyone else in the camp to know what was happening to the other prisoners so they wouldn't be scared. By having a band play music that the Khmer Rouge enjoyed, they were able to have the sounds masked over with the music.

Why was Angka so important to the Khmer Rouge?

·         Angka was so important to them because he was their leader. He ruled the camp and all the Khmer Rouge soldiers who were under him. If they didn’t perform to what he wanted he would have them killed. The bands even plays songs about how they worship Angka and how great he is. They are made to warship Angka like a god and no one else.

If Arn didn’t agree to have sexual intercourse with the Khmer Rouge girl, would she have gotten him killed and not given him more food?

Would you have been able to survive in the situation that Arn had to live in? What would you have done to try and survive?

If you knew about a prisoner that was getting extra food somehow or doing illegal things, would you rat him out if you would get a reward for it?

If you were in Arns position and were told to learn a song you never heard before, dance to it, and sing to try and save your life, would you take it or keep to yourself and not associate with the people? 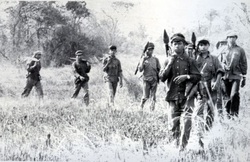